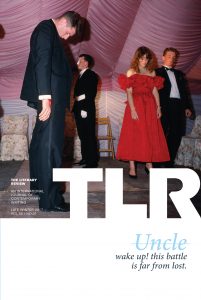 The kid listens to comedy albums religiously. He’s considerate enough to wear a pair of my Koss headphones when he does this. The headphones are black and chrome with a long spiraling cable and a heavyset jack at the end. While he listens, the kid takes notes on whatever flat paper surface he can find. I offered to buy the kid a notebook or some legal pads. He says he’s getting around to it, though as of now, has done nothing.

Sometimes the listening lasts longer than a workday. In these cases, I wok vegetables and boil brown rice and carry up a bowl of it to the room where the kid is ensconced. Often he stops listening. The kid conscientiously picks up the needle off the vinyl, noting approximately the cut and the groove, still wearing the Koss headphones around his neck. He doesn’t switch off the turntable, letting the platter spin. The two of us eat together.

Deep in the night I hear the kid interviewing himself: “Jokes have made me who I am, historical forces notwithstanding. A good joke shapes the comedian, honors him or her. Only the forceful comedian can do this distinct joke. You have to be strong. But frustration can happen, especially when a comedian grows negligent and ceases to respect the joke. Or even grows weary of it. Then the joke is scorned and all is lost. The joke hints at this in small ways. It becomes predictable, limp. The joy that once existed between the comedian and the joke is gone.”